All the excitement and thrill of high stakes casino games 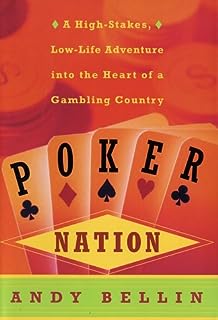 Poker Nation: A High-Stakes, Low-Life Adventure into the Heart of a Gambling Country

“If you look around the table and you can’t tell who the sucker is, it’s you. “On any given Friday night, hundreds of thousands of Americans–men and women alike — pile into kitchens, garages, and back rooms to play their weekly poker game. From basement games in the suburbs to illegal gambling clubs in New York City to the high-stakes World Series of Poker in Las Vegas, Andy Bellin has anted up with some of the world’s greatest players. In “Poker Nation,” he takes us on a raucous journey into the shut-up-and-deal world of professional poker. Even if you don’t know the difference between a flop and a river card — or you do know exactly what it means to have “the nuts” — Bellin is your ace in the hole as you navigate this uniquely American terrain. Look over his shoulder as he learns to count cards, read a legendary player’s body language, hang in there when the chips are down, and, yes, take his beatings like a man. Watch what goes on behind the scenes in illegal poker clubs found in every major city in the country. Meet the colorful personalities and skewed psyches of the players, the dreamers, hustlers, eccentrics, and hucksters who are all part of this strange subculture. Part memoir, part expose, part how-to (or how-“not”-to), “Poker Nation” takes a frank and funny look at one of America’s enduring obsessions. It’s a sure bet. 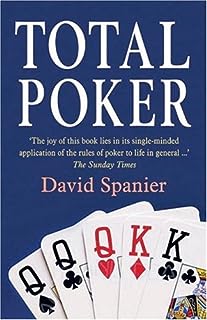 Winning at poker is not just analysis, clever tactics, nor even inspired bluff—although Total Poker examines all these in depth. Ultimately, luck works out the same for everyone—there really is no such thing as “good cards” or “bad cards.” As the author maintains, winning is a “psychological decision” made by each player. Packed with stories about the application of poker to life in general, Total Poker looks at the game’s history, culture, techniques, strategies, rules, and probabilities. David Spanier is a former journalist for The Times and author of Easy Money, Little Book of Poker, The Hand I Played, and Welcome to the Pleasuredome. 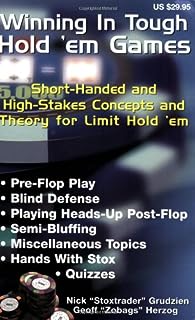 The recent boom of Texas hold em has forever changed the way the game is played. Many more people know how to play this game well. Even the loose players who come to gamble have become far more aggressive, making them more difficult to play against. So a basic tight and patient strategy will no longer guarantee that you can make a significant amount of money in games at the higher stakes. This is especially true short-handed, which have become increasingly popular in the online poker rooms. This text is the first to tackle the complex issues presented when playing short-handed and high-stakes limit hold’em. But even if you happen to only play in softer games, many of the key concepts presented will still help you against the other good players in your game. Winning in Tough Holdem Games includes an examination of pre-flop play, covering issues at a depth of sophistication which have never appeared in print before including discussions of blind stealing, re-stealing, isolating a loose player, big blind and small blind defense, and blind versus blind play. Also covered are thorough sections on playing heads up and semi-bluffing. In addition, over 50 hands, taken from high stakes online games which were played by Stoxtrader, are presented along with appropriate discussion of the strategy involved. This book is a must read for anyone hoping to make a meaningful income from playing limit hold’em. It is a serious text and should be beneficial for those of you willing to make the effort to master this material. 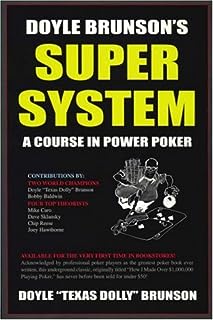 In 600 pages, twice-world champion and Hall of Famer Doyle Brunson and five leading experts in their various specialties tell you when to raise, call, bet, and fold at hold’em (limit and no-limit), 7-stud (high and low), draw poker, and lowball. Collaborators David “Chip” Reese, Mike Caro, David Sklansky, Joey Hawthorne, and former world champion Bobby Baldwin. This treatise on professional-level poker is the result of over 10,000 hours of labor by the world’s greatest players and theorists and has never been equaled in scope or value. This is the must-have book for serious poker players. Illustrated in black and white throughout. 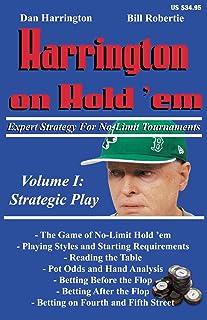 Poker has taken America by storm. But it s not just any form of poker that has people across the country so excited it s No-Limit Hold Em the main event game. And now thanks to televised tournaments tens of thousands of new players are eager to claim their share of poker glory.

Harrington on Hold’em takes you to the part of the game the cameras ignore the tactics required to get through the hundreds and sometimes thousands of hands you must win to make it to the final table. Harrington s sophisticated and time-tested winning strategies, focusing on what it takes to survive the early and middle stages of a No-Limit Hold’em tournament, are appearing here for the first time in print. These are techniques that top players use again and again to get to make it to final tables around the globe.

Now, learn from one of the world s most successful No-Limit Hold’em players how to vary your style, optimize your betting patterns, analyze hands, respond to a re-raise, play to win the most money possible, react when a bad card hits and much, much more.

Dan Harrington won the gold bracelet and the World Champion title at the $10,000 buy-in No-Limit Hold Em Championship at the 1995 World Series of Poker. And he was the only player to make it to the final table in 2003 (field of 839) and 2004 (field of 2576) considered by cognoscenti to be the greatest accomplishment in WSOP history. In Harrington on Hold Em, Harrington and 2-time World Backgammon Champion Bill Robertie have written the definitive book on No-Limit Hold Em for players who want to win … and win big. 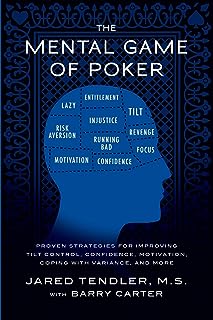 The mental game may be more important in poker than in any other form of competition. It’s one of the only games in the world where you can play perfectly and lose-again and again. Hundreds of poker players have turned to mental game coach Jared Tendler’s revolutionary approach to help them play their best, no matter how badly they’re running. In this book you’ll find simple, step-by-step instructions and proven techniques to permanently fix problems such as tilt, handling variance, emotional control, confidence, fear, and motivation. With the games getting tougher, now is the time to take these problems head on. 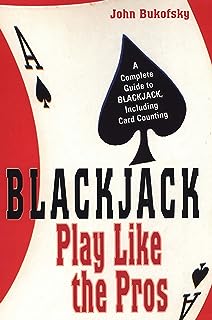 Blackjack: Play Like The Pros: A Complete Guide to BLACKJACK, Including Card Counting

“Blackjack is definitely a game that you can make money playing, and this book shows you how to do it!” – Phil Hellmuth, Jr., winner of nine WSOP titles and author of Play Poker Like the Pros.
Blackjack is by far the most popular casino table game. The reason is because it has the lowest house edge. While other table games give the house a minimum 3% edge, blackjack provides close to even odds for players willing to learn what is called “basic strategy.” And for players who are able to learn card counting, blackjack is actually a beatable game.
But the reality is that out of the millions of people who play blackjack, only a small percentage will take the time or make the effort to play perfect basic strategy. And very few players will take the time to learn card counting. Most of those who do will ultimately fail in a live casino environment.

So what’s a reasonably intelligent person to do? Among the blackjack books available today, few take readers beyond basic strategy, and of those that do, virtually none balance the necessary level of detail with a simple approach that is easily understood by everyone (not just math whizzes and autistic savants).

BLACKJACK: PLAY LIKE THE PROS is a comprehensive and easy-to-understand guide to playing and winning at blackjack. John Bukofsky—an expert player and card counter with over twenty years experience—provides readers with clear and engaging instruction in everything from the basics of game-play and strategy, up to and including card counting at the professional level.
In it, readers will find:

The greatest feature of this book is its instruction in the holy grail of blackjack: card counting. Bukofsky shows readers how to learn and master the technique that many think is simply too difficult to learn, much less use in an actual casino. He also covers the intangibles playing under real world conditions, including many aspects not in any way associated with the actual mechanics of card counting.

How do we know that John Bukofsky is an expert card counter? Simple: he’s been barred from playing blackjack in Las Vegas and harassed in Atlantic City and Connecticut. He’s also played alongside some of the most prominent and prolific gamblers in the world at the Casino de Monte Carlo.

John’s expertise in the mathematics of card counting became apparent by age thirteen, which led to a life-long interest in the game. An engineer by profession, John understands the need for precision and clarity, which he brings to this book. As a result, he has written the most intelligent and up-to-date book on blackjack ever written, one that goes into every level of the game. BLACKJACK: PLAY LIKE THE PROS is destined to become the bible for the next generation of blackjack players.

“A savvy, comprehensive text that covers the essentials of winning blackjack from soup to nuts. Bukofsky is an excellent writer, whose ‘hold-your-hand’ style makes it easy for the reader to master, sequentially, the skills needed to become a successful player. Many blackjack books skimp on details, especially when it comes to the mathematics of the game or complete card-counting systems. Not so here. I highly recommend it.” – Don Schlesinger, author of Blackjack Attack: Playing the Pros’ Way